Lily Lev-Glick is the Founder and Chief Insights Officer of Shopper Sense™.  For more than two decades Lily has researched, explored, and analyzed shopper behavior, purchase motivations, and how retail environments impact decision-making. The convergence of this experience has led to her recognition as one of the most knowledgeable research strategists in the field of Shopper Insights.

Earlier in her career as Director of Research at Point of Purchase Advertising International (POPAI), the global trade organization dedicated to the advancement of marketing at retail, Lev-Glick oversaw the execution of the landmark POPAI Consumer Buying Habits Study which is noted worldwide for establishing the “70% in-store decision rate.”  More than a decade later, Lily was once again engaged by POPAI for her expertise to serve as lead research consultant for the Shopper Engagement Study, which is the first of its kind to combine shopper interviews, eye-tracking, and EEG technology (neuro-marketing science) to understand shopper behavior.  It has been called the largest, most authoritative study of in-store purchase dynamics ever undertaken.

As Vice President at Meyers Research Center, Lev-Glick managed the design and execution of hundreds of primary in-store shopper research studies for a multitude of Fortune 100 brands and retailers. Lev-Glick later moved on to establish the Shopper Insights division at Perception Research Services (now known as PRS In Vivo), recognized as one of the world’s largest packaging and point-of-sale research firms focusing exclusively upon custom, primary research.

Prior to establishing Shopper Sense™ in 2010, Lev-Glick served as Vice President, Research at LG&P In-Store Agency where she led all of the shopper research initiatives. Lily worked closely with in-store merchandising design teams to link actionable analyses to the strategic and tactical applications of shopper marketing solutions, ranging from complete category reinventions to single display initiatives. 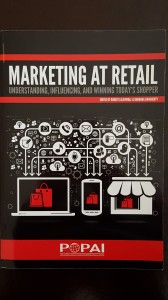